my monthly countdown*
Several months ago, I wrote how hard it was to say goodbye and realize how much these women had come to mean to me. This post is a bit on the happier side as I shed no tears the day I was released!
As my release date quickly approached, I had to be careful who I spoke to about it. In prison inmates who don't want you to go home will sometimes threaten to "take your date." What that means is they'll put something in your belongings, call PREA on you, or fight you. All of which will get you put in isolation under investigation. I was with one woman in the hole, and she was there because someone had threatened to take her date. She had one week left before her release and chose to ask for protective custody.
I was also careful as I didn't want to alienate my friends. Most of them still had a lot of time to do, and it's very frustrating when an inmate talks constantly about their release. So I didn't mention my release date unless my friends brought it up first.
My release date was on one of the coldest days of the year. I believe it was -12 degrees that morning. After 5 am count I got up and went to breakfast. A roommate and my friend, Brady, went with me as they wanted to say goodbye. After breakfast I quietly finished getting ready as my roommates were all asleep. I laid down again for a couple of hours, but didn't go back to sleep. After 7:30 am count I took my mat, sheets, blankets, and pillow downstairs to turn in. All my personal belonging had been packed in a box and would be given to me upon my release. I had kept some hygiene items, but I gave everything to my roommates that morning.
There were three of us from Housing Unit 7 being released that morning. An officer escorted us to medical (the escort was for our safety in case inmates decided to hurt us as we left). There we received our medical paperwork and COVID shot records or COVID test results. From medical we were escorted to visiting.
For the last time I was strip searched and then given a box of clothes my friend had mailed in for me. It was so much fun finding out what she had sent and being able to put on regular clothes. The other two women didn't have clothes sent in, so they were given used officer clothing to wear out. We waited to be called into the business office where I was given a debit card with my remaining funds and then told to sit by a door and wait until my name was called. 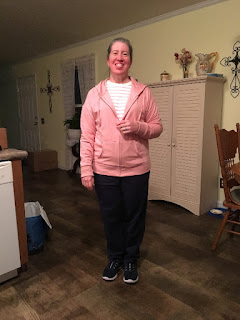 My release clothes
I was called first by two officers. I gave them my ID and COVID paperwork. I was asked several questions to prove I was who I was and then the officer said, "You may go!" What amazing three words! One of the officers walked out with me so she could give me my box of belongings. My friend was waiting for me, we put my box in the trunk, and left prison behind.
You might ask, "what is it like to be free?" Well it is amazing and yet extremely overwhelming. You go to a restaurant and have options to chose from, you go into a store and the selection of merchandise is overwhelming. Having worn khaki and hunter green for 2 1/2 years seeing so many colors was just too much. I didn't give myself time to assimilate. I spent two days getting things I needed, put in a job application online, went to church on Sunday, met my parole officer on Monday, later that day had a job interview, was hired on the spot, trained online on Tuesday, went shopping for work clothes, and was at work on Wednesday. Within one week of being released I was working and had purchased a vehicle.
I battled for months trying to access previous accounts. I couldn't open an online bank account, because I couldn't prove my identity. My credit information was basically blank for the time I was in prison and that was a red flag to banks and insurance companies. I couldn't access my email accounts. I had important documents attached to those accounts that I needed to access. They wanted me to verify my identity by sending a text to a phone number I no longer had. I tried to get my cellphone activated, but was told I still owed a balance on my phone, so I needed to show them proof of payment which was in an email account I couldn't access.
So if you have family or friends being release be patient with them. The longer they've been in prison the more overwhelming the "real" world will be to them. Don't overwhelm them with tons of questions and too many options. Remember, for however many years they were locked up they weren't given options, but rather told what to do. Some prisons will help you get a birth certificate, social security card, and state ID before your release, but others don't. It's impossible to get a job without a valid ID, which you cannot obtain without a social security card, which you cannot get without a birth certificate.
I now have access to my email accounts. I'm not sure how that happened except God worked that out. I now have two bank accounts with a bank in town and one with an online bank. I have car insurance but had to pay a higher premium because of my credit check. I have a working cellphone. I have a job and am starting a second job next week. I have a car that is running like a charm. I still get overwhelmed when someone gives me to many options, and I still feel like I'm catching up with everything that is going on around me. But God is good! He has supplied all my needs above and beyond what I could have ever imagined. 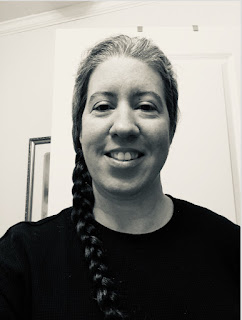 *I drew up this "calendar" soon after getting my official release date (January 2020), so I could keep track of how many months I had left.
I had really long hair as it hadn't been
cut for two years. 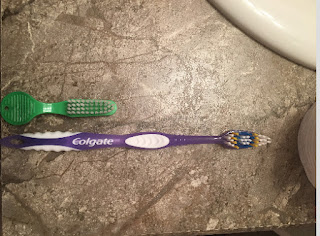 It was a celebration to use a "normal size" tooth-
brush once again!
Labels: helping a former inmate released from prison